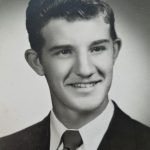 Raymond Claude McIntosh, age 83, was born at home, December 9, 1937, in Freedom Township, Bourbon County, Kansas, and died April 10, 2021. He died in a car crash returning to Buffalo, KS where he lived.

Raymond was a high school graduate of Blue Mound, KS High School, and took many educational and technical classes through the years. He was known to read advanced math books in his leisure. His intelligence, love of music, keen insights, and love of all animals greatly impressed those around him, though he was a bit of a recluse. Raymond held various jobs (selling sewing machines, building boats, and farm work) before his long-term job with the prison system of Phoenix, AZ. He then moved to the Los Angeles area of CA, building bridges, and finally worked with the Water Dept. of Buffalo, KS. Raymond was a member of the Carpenters Union of St. Louis-Kansas City.

He is survived by his first wife and their four children and two stepchildren of the second wife; many grandchildren and nieces and nephews; his brother, Gary McIntosh of Iola, Kansas and his sister, Linda Lou Heidner of Lawrence, Kansas, and his first cousin of Mapleton, Kansas, Edith “Chaplin” Post and Howard. Passing before him were his brothers and a sister: Robert Louis, Richard Earl; William Edwin and Patricia Ellen Schwepker; and his parents: Nora Ellen Atherton and Earl Edwin McIntosh; and first cousins: Iren, Charlie, George, and Cecil Chaplin. At life’s end, Raymond’s dog, Ellie, who survived the accident, was his constant companion. He will be greatly missed.

Cremation has occurred and a Graveside Service is scheduled for 10:00 a.m. May 1, 2021, at the Maple Grove Cemetery under the direction of the Konantz-Cheney Funeral Home, Fort Scott, Kansas. Memorials should be directed to, ‘Your Community Foundation’ for the benefit of animals (a special account established by Raymond); Box 44, Iola, KS 66749, or may be left in the care of the Konantz-Cheney Funeral Home, 15 W. Wall Street, P.O. Box 309, Fort Scott, Kansas, 66701. Condolences may be submitted to the online guestbook at konantz-cheney.com.