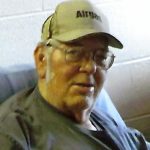 He was a 1966 graduate of the Fort Scott High School, went to work at Chanute Manufacturing, and joined the Army in 1967.  After his service in Korea, Richard returned to Fort Scott and made his home in Garland, Kansas.  Richard returned to work at Chanute Manufacturing and retired after 47 years.  He and his family later moved to the family farm where he lived at the time of his death.  Richard was a welder, farmer, and stockman.  He loved the employees, food and social time at Nu-Grille restaurant.

In addition to his wife, Pat, he was proceeded in death by his parents and youngest son, Stanley Lyn Cullison in 2007.

Pastor Rick Womack will conduct funeral services at 10:30 am, Tuesday, February 26, 2019, at the Konantz-Cheney Funeral Home.  Burial will be in the Clarksburg Cemetery with Military Honors conducted by the Olson-Frary-Burkhart Post 1165 VFW, and Richard’s family will receive the American Flag from the VFW.  The Family will receive friends from 6:00 pm until 7:00 pm Monday, February 25, 2019, at the Konantz-Cheney Funeral Home.

Memorials are suggested to the Drywood Township Community Center, a building project Richard was passionate to support. Contributions may be left in the care of the Konantz-Cheney Funeral Home, 15 W. Wall St., P.O. Box 309. Fort Scott, Kansas   66701.  Condolences may be submitted to the online guest book at konantz-cheney.com