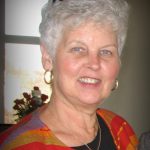 Ruth Elizabeth Farmer, 82, of Fort Scott, Kansas, passed away on December 15, 2020.  She is survived by her loving husband, Gene Farmer, who currently resides at the Presbyterian Manor of Fort Scott.

Ruth was born March 14, 1938, in Kansas City, Kansas, to Edward and Edith Milam. She married Gene Farmer on December 3, 1983, at Overland Park Christian Church in Overland Park, Kansas where they lived until they retired and built a home on their farm in Fort Scott in 1996.

Ruth grew up in Overland Park, Kansas, attending Overland Park Elementary and Shawnee Mission North High School where she graduated in 1956.  She then attended the University of Kansas from 1956 to 1960 and received a BS in Education majoring in Physical Education.  She was an active member of Alpha Delta PI sorority and participated in several outside clubs and organizations. She also went on to receive her Master of Science Degree in Education from KU in 1969.

Ruth enjoyed a satisfying 34-year career as a Physical Education Teacher for the Olathe Kansas School district, first at Olathe North High School from 1960 to 1968, then at Santa Fe Trail Junior High from 1968 until her retirement in 1994.

Ruth loved to travel, collected all kinds of KU and Jayhawk memorabilia, and gardened on their farm.  She and Gene took several wonderful trips and cruises together. She enjoyed making cross-stitch and needlepoint gifts for her family and friends such as Christmas stockings, pictures, and quilts, and always included a Jayhawk somewhere on each. Ruth was an avid KU basketball and football fan and held season tickets to Allen Field House for over 30 years. She and Gene also enjoyed attending the New Theatre dinner theater in Overland Park with her sister & her husband.  Ruth was also active in several Women’s organizations and church groups over the years both in Overland Park and Fort Scott.

Ruth was the oldest of three and is survived by her loving sisters Janice M. Sprinkle of Overland Park and Margaret A. Ferriman of Hot Springs Village, Arkansas, and numerous nieces and nephews of the Sprinkle, Ferriman, and Milam families.  When Ruth married Gene, she became the stepmother of Cynthia Huyett (Kansas City, KS), Rod & Kris Farmer (Olathe, KS), Marty & Sandy Farmer (Independence, MO), and Kathleen Bailey (Belton, MO) who preceded her in death.  Over the next 37 years, she became the grandmother of 18 and great-grandmother of 16, who knew her as either Aunt Ruthie or Grandma Ruthie.