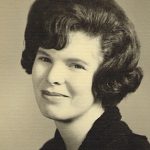 Shirley Lorene Stephens, 84 of Fort Scott, passed away Friday evening September 27, 2019, at Ascension Via Christi Hospital in Pittsburg, Kansas.  She was born April 17, 1935, in Fort Scott, the daughter of Dan and Edith Amelia (Tucker) Freer.  She married Roger Boyles on September 19, 1952, in Piggett, Arkansas, he preceded her in death.  She married John Albert Stephens on June 19, 1972, in Girard, Kansas, he preceded her in death on October 20, 2007.

During her life, Shirley had several jobs one of which was Nanny/Cook/Housekeeper for several different families including her own.

She is survived by four daughters, Gail Byrd of Webb City, Missouri, Leanna and Mike Burke of Blue Springs, Missouri, Moria and Darrin Gauthier of Fort Scott, and Michelle and Doug Walton of Mildred, Kansas, four sons, Gus and Heidi Boyles of Frontenac, Kansas, Chuck and Holli Boyles of Pittsburg, Kansas, Mike Stephens of Westphalia, Kansas, and Matt and Jennifer Stephens of Milton-Freewater, Oregon, a sister, Raylene Freer of Fort Scott, and a brother, David Freer of Fort Scott, 15 grandchildren, and 11 great-grandchildren.  In addition to her husbands, Roger Boyles and Johnnie Stephens, she was preceded in death by a grandson, Roger Burke, a sister, Joan Collins and her parents.

Funeral Services for Shirley Stephens will be at 10:30 a.m., Tuesday, October 1, 2019, at the Konantz-Cheney Funeral Home with Rev. Bill Hawk officiating. Burial will follow at the Evergreen Cemetery.  The Family will receive friends from 6:00 p.m. to 7:00 p.m. Monday, September 30, 2019, at the Konantz-Cheney Funeral Home.  Condolences may be submitted to the online guest book at konantz-cheney.com.