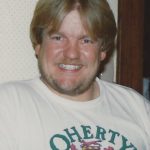 Stephen Joseph Doherty (Stevie, Duff), 62, passed in his sleep surrounded by his family members at The University of Kansas Hospital after a lengthy illness on August 3, 2022.  Stevie was born September 13, 1959, son of Bernard Doherty and Delores (Walker) Doherty in Fort Scott, Kansas.

He attended grade school at St. Mary’s Catholic School and graduated from Fort Scott High School in 1977.  He was a big sports fan throughout his life and loved the Kansas City Chiefs, Kansas City Royals, Notre Dame football, and the Kansas Jayhawks.  He loved competition and played football, baseball, chess, poker, golf, and tried hard to play basketball.  He also loved fishing, reading and history.  He read all the classics from Tolstoy to Hemingway, along with all the local newspapers at the breakfast counter in any city he was in.  After graduation, he attended Pittsburg State University for some time before starting his career in the construction business as a tuck pointer and mason.  He worked for Mid-Continental Waterproofing Company, Landmark Restoration (for his brother, Ed) Midland Restoration,  and started his own company for a short time called Over All Restoration with the slogan “Overall the best, Overall the rest”.  His work took him all over the United States, and some of the notable places he worked on included the Jefferson Davis Memorial in Kentucky, the State Capitol of Texas in Austin, the John Hancock building in Chicago, and Union Station in Kansas City.

Stevie had a big heart and was a wonderful caretaker for his mom in her later years at home and at the nursing home.  He not only visited her at the nursing home, but also took time to visit with everyone in the day room to make sure residents had someone to talk to.  He was also proud of his role as mentor and coach to his nephew, Jeffrey Doherty.

Steve knew no stranger and was a skilled conversationalist, storyteller and comedian (or so he thought).  He had so many friends.  He was a member of the Elks Lodge and the “Holmtown Crew”. Steve was also a member of Mary Queen of Angels Church.

Father Bob McElwee will officiate the Mass of Christian Burial 11:00 a.m. Saturday, August 6, 2022, at Mary Queen of Angels Catholic Church in Fort Scott, Kansas with burial following at St. Mary’s Cemetery, under the direction of the Konantz-Cheney Funeral Home. After the burial, everyone is invited for lunch and social at the John F. Kennedy Gymnasium. The Rosary will be recited at 5:30 p.m. Friday evening, August 5, 2022, at the funeral home with a visitation immediately following. Memorial contributions may be made to Mary Queen of Angels Catholic Church or St. Mary’s Catholic School and may be left in the care of the Konantz-Cheney Funeral Home, 15 W. Wall Street, P.O. Box 309, Fort Scott, Kansas, 66701. Condolences may be submitted to the online guestbook at konantz-cheney.com.