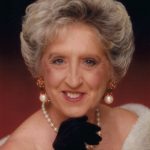 Thelma’s first job was at the Western Insurance. She and Marion started Phillips Insurance Agency in 1961 and retired from there in 1996.

Rev. Dr. Jared Witt will conduct funeral services at 10:00 a.m. Tuesday, June 29, 2021, at the First Presbyterian Church in Fort Scott with burial following in Evergreen Cemetery under the direction of the Konantz-Cheney Funeral Home. The family will receive friends at the funeral home Monday, June 29, 2021, 6:00 – 7:00 p.m. Memorial contributions may be made to the First Presbyterian Church and may be left in the care of the Konantz-Cheney Funeral Home, 15 W. Wall Street, P.O. Box 309, Fort Scott, Kansas, 66701. Condolences may be submitted to the online guestbook at konantz-cheney.com.