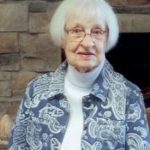 Thorene and Kale were long-time residents of Wichita, Kansas, and were founding members of West Heights Methodist Church. Thorene and Kale moved to Fort Scott, Kansas in 2012 and have lived here up until the time of their deaths.

Thorene is survived by her children, Kent L. Roberts and wife Becki, of Fort Scott, and Kim A. Roberts and wife Kalyn, of Plano, Texas; three grandchildren, Brooke Roberts-Higgins, of Carthage, Missouri, Scott Roberts, of Longview, Texas, and Ryan Roberts, of Plano, Texas; four great-grandchildren, and numerous nieces and nephews. In addition to her husband Kale, she was also preceded in death by her parents, and three brothers, Paul Johnson, Garlan Johnson, and Irwin Johnson.

Following cremation, private memorial services will be held at a later date. The family requests memorial gifts be made in Thorene’s memory to: Care to Share – The Sharing Bucket, 2478 Limestone Road, Fort Scott, Kansas 66701, or may be left in the care of the Konantz-Cheney Funeral Home, 15 W. Wall Street, P.O. Box 309, Fort Scott, Kansas, 66701. Condolences may be submitted to the online guestbook at konantz-cheney.com.