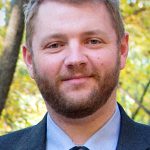 After a 2-week hospital stay, Todd Spencer Woodward, a 2003 Fort Scott High School Graduate, died on December 1, 2021, in Auburn, Washington, of natural causes. Todd was born to Barbara Doherty Woodward and John Spencer Woodward in Ocean Springs, Mississippi on July 26th, 1984. Todd was proceeded in death by his father John “Woody,” his grandparents Margaret and John Woodward, and Delores and Bernard Doherty.

He is survived by his mother Barbara Doherty Woodward, of Fort Scott and his sister Amber Woodward Benzabeh and husband Adam Benzabeh of Westfork Arkansas. He is also survived by 16 Aunts and Uncles and 35 first cousins, as well as many, many friends who loved him.

After graduation, Todd attended college for a while and then moved to Orlando, Florida where he worked as an Audio/Visual Technologist for conventions all over the country in various venues. Covid effectively canceled all conventions, so in Dec. 2020, Todd decided to follow his lifelong dream of living in the Pacific Northwest where his family had spent some very wonderful times. He was pursuing new career opportunities in Coding and Stock Brokerage there when he became unexpectedly ill on Nov. 20th. He lost his battle to his illness in spite of heroic efforts to save him.

Todd grew up in Vancleave, Mississippi, New Orleans, Louisiana, and Houston, Texas before moving to Fort Scott, his mother’s hometown, in 1995. His generous and gentle spirit was evident in the way he treated people. To his mother’s dismay, sometimes he would often give his things away if someone else needed them more. His empathy extended to animals. He rescued kittens, puppies, turtles, and even fish that had floated onto shore after a flood. He called a humane society to help save a heron that was sick at a hotel conference where he was working, and spent thousands to save his elderly Husky.

From an early age, Todd was skillful in all sports until an injury at 12 years old prevented him from running.

He then turned his talent to electronic sciences, music, and photography. Todd was a gifted pool player as well as a musician, playing the guitar, saxophone, and piano by ear. He learned the lyrics to thousands of songs by heart.

Anyone in need could count on Todd. When his father and grandmother became ill, he stayed up all night, by their side, until the moment they passed. Todd was too good to leave this world so soon, but he left us with an incredible legacy of how to live a selfless life. He was the very best of us. We will miss his big bear hugs and quick wit.

Memorial Services will be held at 10:30 a.m. Saturday, April 30, 2022, at the Konantz-Cheney Funeral Home. Interment for immediate family and friends will be held at a later date at St. Mary’s Cemetery in Fort Scott.

Although Todd did not have cancer, donations in his name are requested for Care to Share in Fort Scott (in appreciation for the care they gave both his father and mother) or, because of his love for animals in need, to an Animal Shelter of donor’s choice. Memorial contributions for Care to Share may be left in the care of the Konantz-Cheney Funeral Home, 15 W. Wall Street, P.O. Box 309, Fort Scott, Kansas, 66701. Condolences may be submitted to the online guestbook at konantz-cheney.com.