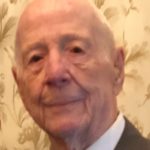 He is survived by a daughter, Melinda Kay Sedelmeyer and husband Rob of Medina, Ohio, and a son, Virgil Bradley Forgey of Payson, Arizona, a sister, Ruth Arlene Eubank of Peoria, Arizona, three grandchildren, and four great-grandchildren. He was preceded in death by his parents and his wife, Shirley.

Rev. Steve Cole will conduct private graveside services at the Fort Scott National Cemetery Thursday, December 31, 2020. The family suggests memorials to the First United Methodist Church, donations may be sent to, or left in the care of the Konantz-Cheney Funeral Home, P.O. Box 309, 15 W. Wall St., Fort Scott, Kansas   66701. Condolences may be submitted to the online guestbook at konantz-cheney.com.