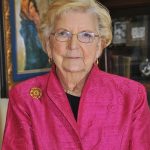 Velma Jean (VJ) Stevens, 97, formerly of Prescott and most recently of Anamosa, Iowa, passed away peacefully on October 7, 2021, in Anamosa.  She was born on April 2, 1924, in Stotesbury, Missouri.  She lived in Prescott for much of her life but later moved to Rogers, Arkansas, Olathe, and Arlington, Texas.  She was strong in faith throughout her life and was a faithful member of the local Catholic church in each community in which she lived. She married William P. Stevens, Jr. on April 20, 1943, and together, they celebrated their 67th wedding anniversary prior to his death in 2010.

VJ studied art with several notable professionals in the Kansas City area over a fifteen-year period and later taught art lessons in her home in Olathe for many years.  She painted hundreds of works of art in oil, pastels, and graphite which were sold, gifted to friends and family, and donated to churches and other organizations.  She especially enjoyed doing portraits and religious works of art.

She is survived by her daughter, Beverly Behgam and husband, Roger, of Arlington, Texas; daughter, Patty Himel and husband, A.J., of Round Rock, Texas; son, Paul Stevens and wife, Debbie, of Cascade, Iowa; and daughter, Mary Murray and husband, Ernie, of Leavenworth, Kansas; a sister, Elaine Coffin, of New Orleans, Louisiana; 8 grandchildren, and 7 great-grandchildren.  She is preceded in death by her parents, Frank Orr Martin and Corda Walker Martin, along with six brothers and sisters.

Father Yancey Burgess will conduct the Funeral Mass at 10:00 a.m. Thursday, October 14, 2021, at the Mary Queen of Angels Catholic Church under the direction of the Konantz-Cheney Funeral Home. Burial will be in the Prescott Cemetery. The family will receive friends Wednesday evening, October 13, 2021, 6-7:00 p.m. at Konantz-Cheney Funeral Home, 15 W. Wall St., Fort Scott, Kansas. Condolences may be submitted to the online guestbook at konantz-cheney.com.