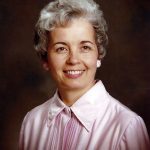 Willa Jean Ellis, 87, of Fort Scott, passed away peacefully Monday afternoon, January 22, 2018 at her home.  She was born March 25, 1930, in Rich Hill, Missouri, the daughter of Howard and Gertie (Williams) Marlin. She married her childhood sweetheart Danny Ellis February 8, 1948, in Nevada, Missouri.

Willa was a beloved mother and grandmother; devoted wife, and trusted friend to many. Together she and her husband were strong supporters of the Fort Scott, Kansas and Rich Hill, Missouri communities, including The Beacon, Ellis Family Performing Arts Center, Ellis Park, the Rich Hill High School and Rich Hill Library. In the early 1960’s Willa and Danny started Midwestern Distribution with just three trucks. It eventually grew to 1,000 trucks and employed over 2,000 people. They sold the company to Leaseway Transportation in 1981, and started Multi Service Corp., a trucking and aviation credit card which is currently the largest aviation credit card in the world.

Following cremation, Rev. Reed Hartford will conduct funeral services 11:00 a.m. Saturday, January 27, 2018, at the Konantz-Cheney Funeral Home, with burial following in the Evergreen Cemetery. The family will receive friends Friday evening, January 26, 2018, 6:00-7:00 p.m. at the funeral home. In lieu of flowers, memorial contributions may be made to the Ellis Foundation for Memorial Scholarships and left in the care of the Konantz-Cheney Funeral Home, 15 W. Wall Street, PO Box 309, Fort Scott, KS 66701. Condolences may be submitted to the online guestbook at konantz-cheney.com.