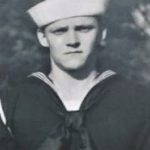 William Leroy “Buzz” Barnett was born on May 30, 1920, in Fort Scott, Kansas. He was the third of five children born to William Clem and Emma Marie (Ewing) Barnett.

Buzz enlisted in the Navy on Sept 18, 1940. He was 20 years old. He was eventually assigned to the U.S.S. West Virginia as a Fireman, Third Class, and was stationed at Pearl Harbor, Hawaii.

Buzz was declared Missing In Action on December 7, 1941, when the U.S.S. West Virginia was struck at Pearl Harbor during the bombing. His body was never recovered, and in February of 1942, Buzz’s parents received a telegram informing them that after an exhaustive search, their son was officially declared to have lost his life in the service of his country on December 7, 1941. His mother Emma had an especially difficult time accepting his death and believed he had been injured and lost his memory and could not come home.

All of the extended Barnett family is thankful to the United States Navy and all the efforts of the military to both finally be able to identify Buzz and bring him back home to his birthplace, Fort Scott, KS. Through their efforts, his mother’s wish has finally come true almost 80 years since his death; Buzz has come back home.

Pastor Gary DeMott will conduct graveside services for F3c William Leroy Barnett at 1:30 p.m. Friday, May 28, 2021, at the U.S. National Cemetery in Fort Scott, Kansas, under the direction of the Konantz-Cheney Funeral Home. Full Military Honors will be conducted at the cemetery by the United States Navy. Condolences or messages to the family may be submitted to the online guestbook at konantz-cheney.com.