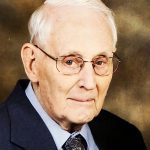 Willis “Hugh” Irvin, 99, of Fort Scott, formerly of Rogers, Arkansas, passed away Wednesday, November 6, 2019, at his home in Presbyterian Village. He was born in Siloam Springs, Arkansas, February 10, 1920, the son of Herbert and Hope (Swayze) Irvin. On June 19, 1945, Hugh married Mary Agnes Barrett in San Francisco, California, where they had met on a blind date.

Hugh was a graduate of Decatur High School in Georgia, Class of 1938. Dr. Irvin graduated with a degree in Veterinary Medicine from Auburn University, Class of 1943.  During WWII, Hugh was a Lieutenant in the U.S. Navy and served as a Communication Officer on the USS Barnett in the European Theatre and took part in the invasion at Salerno, Italy, and D-Day at Utah Beach, Normandy.  His next assignment was on the USS Montrose in the Pacific Theatre involved in the assault on Okinawa. When the war ended, his ship landed the first U.S. troops into Occupied Japan at Sasebo.

After the service, he started his career in Omaha as a USDA Veterinarian Meat Inspector. As he rose through the ranks, he worked in Chicago, Indianapolis, New Jersey, New York, Kansas City, and Dallas. He retired after 35 years of service as the Director of Federal Meat and Poultry Inspection in Washington, DC. He and Mary retired to Rogers, Arkansas, in 1981. He was a longtime member of the Rogers’ Noon Kiwanis Club, a member of the Association for Beaver Lake Environment and a volunteer at Rogers’ St. Mary’s Hospital for many years.

Hugh will be remembered for his great sense of humor which he used professionally as well as socially to the amusement of his friends and family. He was a prolific, engaging storyteller who, in his Southern drawl, entertained all with his stories of growing up during the depression in northwest Arkansas.  Hugh had an amazing memory for jokes and a dictionary mind for vocabulary, excelling at crossword puzzles. He enjoyed traveling in retirement, exploring new places and foods. He made friends wherever he lived or worked. His love of history led him in his later years to read a biography on every president.  Always active, he loved gardening, square dancing, and biking.

He was deeply caring about his family, his community, the environment and the wider world around him. He was proud of his public service in the military, career in food safety, and years of community volunteering. He was loved by an extended family and friends who miss the character and brightness he brought into the world.  Just like the great books he loved, he changed us in many ways and will be in our hearts forever.

In addition to his wife, Mary, he is survived by two sons, Roger (Susan) of Monroe, Oregon, and David (Janet) of Fort Scott, Kansas, a daughter, Barbara Irvin (Bruce Mayer) of Madison, Wisconsin, four grandchildren, Patrick Irvin (Jarita), Christopher Irvin (Annie Brice), both of Oregon, Kelly Irvin and Betsy Philipp (Nick), both of Kansas, and six great-grandchildren, Tyler, Henry, Jack and Shail Irvin of Oregon and Barrett and Theo Philipp of Kansas. He was preceded in death by his parents, two brothers, Leslie Irvin, and Jack Irvin and two sisters, Marguerite Steele and Evelyn Jean Bagwell.

Funeral arrangements for Hugh Irvin will be at Mary Queen of Angels at 12:00 pm on Saturday, November 9, 2019, under the direction of the Konantz-Cheney Funeral Home. Interment will be at the Fort Scott National Cemetery at a later date.  Memorials may be made to either The Nature Conservancy at nature.org or the Good Samaritan Fund at The Presbyterian Village, and may be left in the care of the Konantz-Cheney Funeral Home, P.O. Box 309, 15 W. Wall St., Fort Scott, Kansas, 66701.