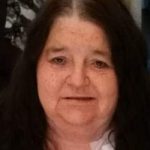 Carolyn Blanche Franklin, 63, of Fort Scott, passed away Saturday evening, December 29, 2018, at Mercy Hospital in Joplin, Missouri.  She was born April 11, 1955, in Fort Scott, Kansas, the daughter of James and LeOne Louise (McCreedy) Cullor. She married Richard Leon Franklin December 19, 1973, in Miami, Oklahoma. He preceded her in death March 20, 2009.

Carolyn is survived by her children, Jared Franklin, Josh Franklin and wife Lesha, and Jessica Franklin, all of Fort Scott; a brother, James Cullor and wife Mary, of Woodland, California; a sister, Linda Cullor Smith and husband Bill, of Mission, Kansas; six grandchildren, Cameron, Courtland, Jayden, Tanis, Josiah, and Henley, and a great-grandchild on the way. In addition to her husband Richard, she was also preceded in death by her parents.

Funeral services are scheduled for 10:30 a.m. Saturday, January 5, 2019, at the Konantz-Cheney Funeral Home with burial following at the Memory Gardens Cemetery. The family will receive friends Friday evening January 4, 2019, from 7:00-8:00 p.m. at the funeral home. Memorial contributions may be made to the Carolyn Franklin Memorial Fund and may be left in the care of the Konantz-Cheney Funeral Home, 15 W. Wall Street, PO Box 309, Fort Scott, KS 66701. Condolences may be submitted to the online guestbook at konantz-cheney.com.