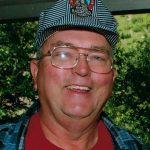 Charles Earl “Charley” Schubert, 75 of Americus, Kansas, formerly of Uniontown, Kansas, passed away, Thursday, February 13, 2020, at Stormont Vail Hospital in Topeka, Kansas.  He was born, October 3, 1944, in Fort Scott, Kansas the son of Ira Edward and Doris Elizabeth (Likely) Schubert. He married Lora May Gerdsen on December 18, 1966, in Uniontown, Kansas, she survives of the home.

Charley grew up in and around Hiattville, Kansas, and he was a member of the 1962 Graduating Class of Uniontown High School.  After High School, he served three years in the U.S. Army. He was an Operating Engineer for City Service/Southern Star a Natural Gas Company which moved he and his family around the State of Kansas with their final move being to Americus, Kansas.  He attended the Countryside Baptist Church of Americus, Kansas.

In addition to his wife, Lora of the home, he is survived by two sons, Ben and his wife, Jennifer Schubert and Mark Schubert, all of Emporia, Kansas, a daughter, Erica and her husband, Olivier Schubert-Chikly, of Uniontown, Kansas, two brothers, Don and his wife, Janice Schubert of Mound City, Kansas and Roger and his wife, Lorene Schubert of Enid, Oklahoma, two grandsons, Dalton and Brendan and a great-granddaughter, Sophia.  He was preceded in death by his parents, four brothers, Jim, John, Walter (Dick) and Gary, a sister, Ruth Keith, and a granddaughter, Cherie.

The family will have a Memorial Service at 7:00 p.m., Friday, February 21, 2020, at the Countryside Baptist Church in Americus.  The Funeral Service will be at 11:00 a.m., Saturday, February 22, 2020, at the Konantz-Cheney Funeral Home, in Fort Scott, Kansas.  Burial will be in the Hatch Cemetery near Uniontown, Kansas. Military honors will be conducted at the cemetery by the Olson-Frary-Burkhart Post 1165 Veterans of Foreign Wars Memorial Detail. The family suggests Memorials to the Uniontown F.F.A., Contributions may be left in the care of, the Konantz-Cheney Funeral Home, 15 W. Wall St., P.O. Box 309, Fort Scott, Kansas 66701.  Condolences to the family may be submitted to the online guestbook at konantz-cheney.com.