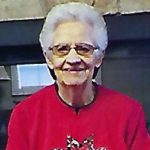 Edith graduated from Metz High School in 1942 and was involved in Basketball and Orchestra. She went on to receive her nurse’s training in Fort Scott, graduating in 1945. She served her community in the Cadet Nurse Corps during WWII. Edith worked as a nurse in the Fort Scott area for many years, mostly in the OB Department at Mercy Hospital for thirty years. She was a member of Bethel Community Church, and a TOPS Charter Member & Weight Recorder for over fifty years.

After her retirement, Edith cared for her husband until his death in 1984. She traveled to all fifty states as well as Europe and Asia. She enjoyed sewing and crocheting, and she volunteered at the Mercy Hospital Gift Shop.

Pastor Ben Heffernan will conduct funeral services at 11:00 a.m. Saturday, January 26, 2019, at the Konantz-Cheney Funeral Home with burial following at the Centerville Cemetery. Memorial contributions may be made to the Bethel Community Church and left in the care of the Konantz-Cheney Funeral Home, 15 W. Wall Street, PO Box 309, Fort Scott, KS 66701. Condolences may be submitted to the online guestbook at konantz-cheney.com.