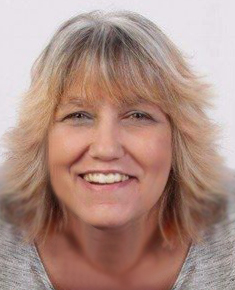 Elizabeth Irene Forester Cain, 53, of Pittsburg, Kansas died Tuesday afternoon, January 31, 2017. She was born July 5, 1963 in Kansas City, Missouri, the daughter of Ernest Richard and Hester Elizabeth (West) Forester. She married Steven Cain June 17, 2006 in Hampton, Virginia, and he survives of the home.

Chaplain Wayne Mason will conduct funeral services for Irene 11:00 a.m. Monday, February 6, 2017 at the Konantz-Cheney Funeral Home with burial following at the Dayton Cemetery, near Devon, Kansas. Memorial contributions may be made to the Elizabeth Irene Cain Memorial Fund, and left in the care of the Konantz-Cheney Funeral Home, 15 W. Wall Street, PO Box 309, Fort Scott, KS 66701. Condolences may be submitted to the online guestbook at konantz-cheney.com.