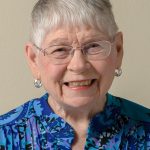 Elsie graduated from Whiting High School in 1945. She graduated from Clark’s Business School in Topeka, Kansas, and went on to manage a restaurant, a deli, and a hearing aid company. She was a member of the Wakarusa Presbyterian Church, and attended the First United Methodist Church in Fort Scott. Elsie served as Worthy Matron of the Beulah Chapter of O.E.S. of Carbondale, Kansas, and she sang with the Sweet Adelines in Topeka until she was 80 years of age and sang with them at Carnegie Hall.

Elsie is survived by her children, Patricia Harry and husband Steve of Fort Scott, Kansas, Richard Sellen of Olathe, Kansas, Marcia Sellen and husband Richard DeVoe of Gladstone, Missouri, and Pamela Miller and husband Ross of Houston, Texas; six grandchildren, and nine great-grandchildren. In addition to her husband William, she was also preceded in death by her parents, a sister, Minnie Belden, and a brother, Walter Belden.

Following cremation, Rev. Steve Cole will conduct memorial services at 11:00 a.m. Monday, April 12, 2021, at the First United Methodist Church in Fort Scott under the direction of the Konantz-Cheney Funeral Home. Elsie will be buried with her husband William in the Spring Hill Cemetery in Whiting, Kansas. Condolences may be submitted to the online guestbook at konantz-cheney.com.