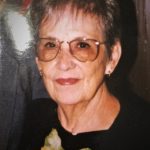 Erla is survived by two sons, Mark Casner and his wife Donna, and Keith Casner, both of Fort Scott; a sister, Fern Wratchford of Fort Scott; four grandchildren, and nine great-grandchildren. In addition to her husband Merle, Erla was also preceded in death by her parents, a brother, William Bloesser, and a grandson, Raef Casner.

Father Dave Jenkins will conduct funeral services for Erla at 2:00 p.m. Thursday, March 12, 2020, at the Konantz-Cheney Funeral Home with a Visitation beginning prior to services at 1:30 p.m. Burial will be held at the Fort Scott National Cemetery at a later date. Memorial contributions are suggested to St. Peter’s Episcopal Church and may be left in the care of the Konantz-Cheney Funeral Home, 15 W. Wall Street, PO Box 309, Fort Scott, KS 66701. Condolences may be submitted to the online guestbook at konantz-cheney.com.