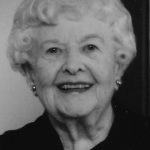 On Saturday, March 14, 2020, Esther Anne Sewell passed from this earth at age 97. She was known as Annie to her friends, Grannie Annie to her grandchildren and, of course, Mom to her children.

Annie is survived by three children: Larry Sewell and wife Patricia of St. Louis, Steve Sewell and wife Victoria of Fort Scott, and Barbara McCord and husband David, also of Fort Scott. She is also survived by six grandchildren: Stephanie King, Ashley Ryan, Meredith Tucker, Victoria (Tori) Sewell, Forrest Sewell, and Lee Painter, and their spouses. Annie leaves behind nine great-grandchildren, with one more due in May.

She is preceded in death by her first husband, Larry Woods, who gave his life at the Battle of the Bulge in January of 1945 during World War II, and her second husband, Glen Sewell, who also fought in Europe and received the Purple Heart, passed in 2016.

Annie was born October 31, 1922, to Mark and Esther Weeks in Fort Scott, Kansas. She graduated from Fort Scott High School in 1939 and Fort Scott Community College in 1941. She received her degree from Kansas State University in 1944, where she was a member of Alpha Delta Pi. She married Larry Woods in the summer of 1944 in Fort Scott and moved to Camp Maxey near Paris, Texas. Annie moved back to Fort Scott in August of that year.

In August of 1948, she married Glen Sewell, Jr. in Lawrence, Kansas.  Annie, after teaching art at Fort Scott High School for one year, left to share in the responsibilities of the Fort Scott Greenhouse with her parents. Glen came to Fort Scott to be the office manager for Key Work Clothes and later joined the family business with Annie.

A faithful Christian, she was active in the First Presbyterian Church.  Annie was also a charter member of the Old Fort Genealogy Society and the PEO Chapter FU. She was a volunteer for the Old Fort before it became a National Historic Site. Her hobbies included golf, gardening, needlepoint, floral design, antique collecting and enjoying life.

Having lived through both the Depression and the Dust Bowl, Annie was always grateful for everything and appreciated the little things. She was proud of her family and was a good friend to many. She was hard-working from a very young age, making regular trips with her parents to the rail station to gather fresh-cut flowers shipped from the cities. As a young woman, Annie helped nurture the Fort Scott Greenhouse into a familiar establishment that flourished for many years in Fort Scott. Her hard work and creative mind impacted many who experienced her beautiful window displays, bouquets and more. Her flowers comforted the sick and mourning, celebrated births and weddings, and brought joy to many life events.

A graveside service will be held at the National Cemetery for family members only. A celebration of Annie’s life will include her friends in the community and family at a later date. She would want everyone to stay healthy and safe.

Memorials for the Good Samaritan Program/Presbyterian Village can be left with Konantz-Cheney Funeral Home, 15 Wall Street, Fort Scott, P.O. Box 309, 15 W. Wall St., Fort Scott, KS   66701. Condolences may be submitted to the online guestbook at konantz-cheney.com. The funeral home will be open from 8:00 a.m. to 5:00 p.m. for folks to drop by and sign the guestbook.