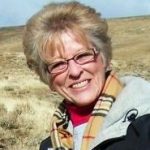 Evonna Lou McIntosh, 80, passed away Monday afternoon January 3, 2022, at the Via Christi St.Francis Hospital in Wichita, Kansas. She was born March 6, 1941, in Parker, Kansas, the daughter of Glen and Opal (McCarty) Davey. She married Richard Earl McIntosh on June 21, 1959, in Pleasanton, Kansas, and he preceded her in death.

Evonna graduated from Parker High School in Parker, Kansas, where she grew up. She was a seamstress for many years, and was a member of St. Patrick’s Catholic Church, Wichita, Kansas.

Evonna “Blondie” was a devoted wife, mother, sister, grandmother, and great-grandmother. Born and raised on a farm, she met Richard when she was 15. They dated until she graduated from high school and married. The first three years of marriage brought three children. At this time the family was living in Osawatomie. In 1970 the family moved to Wichita to open a music store. Blondie and her husband loved music and had a band and Blondie occasionally sang and played the bass guitar. In 1981 the family moved to Neosho, Missouri where another business was started. During this time Blondie worked at Teledyne, Sunbeam, and Lazyboy. She remained in Neosho until the death of her husband when she and her oldest son Jimmy D. moved to Wichita. Shortly after this move, Jimmy became sick and passed away with Blondie by his side. Later that year, her youngest son moved to Wichita and has been with Blondie including the past few years while she was ill. Her middle child, Rhonda lives in Wichita and spent lots of time with Evonna.

Blondie was rarely seen sitting down; she was always doing something and helping out. She made sure to keep track of family on Facebook and texting. She made this her primary communication tool and she loved knowing what everyone was up to. You could always count on positive words from her! Blondie always had a smile on her face, a ready ear to hear about your family, and the warmest hugs. She loved the sunshine, warm weather, and animals. She loved to fish, ride horses, and she could calm any animal.

More than anything her true passion was watching the Kansas City Chiefs football team, especially in her later years when should not get out so much. She was their number one fan.  She loved all sports and enjoyed watching and hearing about how her great-grandchildren did. Blondie will truly be missed by all, her presence, her smile, her contagious laugh, her love for the Chiefs, and most of all her welcoming hugs.

Father Robert McElwee will officiate the Funeral Mass at 10:00 a.m. Monday, January 10, 2022, at the Konantz-Cheney Funeral Home, 15 W. Wall St., Fort Scott, Kansas. Burial will follow at the Maple Grove Cemetery in Fort Scott. Condolences may be submitted to the online guestbook at konantz-cheney.com.