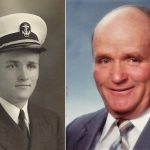 George Marcus Warren, 98, of Uniontown, Kansas, passed away Thursday morning, January 21, 2021. He was born November 16, 1922, in a barn near Muskogee, Oklahoma, the son of Rupert Marcus and Clara Alma (Price) Warren.

At age four, George and his family moved from Muskogee to McCune, Kansas in 1926. George graduated from McCune High School, President of his class, in 1941. After high school, George moved to Long Beach, California where he worked as a riveter for Lockheed. Later, he moved back to Kansas City, working as a riveter for Mid America Aviation. While working there, George enlisted in the Naval Air Corps as a pilot in the Test Flight Division in Hawaii. After World War II, he enrolled at Pittsburg State University where he was Phi Sigma Epsilon president. He graduated from PSU with a Bachelor’s degree in Business Administration.

After graduation from PSU in 1949, George came to Uniontown, Kansas, and took up farming with his dad Rupert. On October 13, 1956, George married the love of his life, Wilma Carolyn Bilyew. Two sons, Mark Edward and Joseph William were born to this union.

George served the Uniontown community on various boards. He was a member of the Uniontown United Methodist Church, serving as Chairman of the Board for several terms. He also served as President of the Uniontown Ruritan Club, and served on the Farmers Home Service Agency Board, Bourbon County Soil Conservation Service, Farmer’s Co-op Board for Fort Scott and Uniontown, and chaired the committee that unified schools to form U234 and U235. George also coached T-ball, Little League, and Pee Wee Baseball.

Wilma Preceded George in death on February 15, 1994. After her death George continued to serve the Uniontown community as a public servant. In 2013 George Attended an Honors Flight in Washington D.C.

Rev. Carl K. Ellis will conduct private family services 11:00 a.m. Tuesday, January 26, 2021, at the Uniontown United Methodist Church under the direction of the Konantz-Cheney Funeral Home. Friends may see George and sign the book at the funeral home, and are invited to the graveside service at 12:00 noon on Tuesday at the Uniontown Cemetery following private services. Memorial contributions are suggested to the Uniontown Community Ruritan Club and may be left in the care of the Konantz-Cheney Funeral Home, 15 W. Wall Street, P.O. Box 309, Fort Scott, Kansas, 66701. Condolences may be submitted to the online guestbook at konantz-cheney.com.