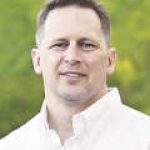 Justin James Calvert, age 45, of Madison, Wisc., passed away on Sunday, Sept. 22, 2019, from accidental carbon monoxide poisoning. He was born on September 21, 1974, in Girard, Kan., the son of Douglas Calvert and Marcia (Hughes) O’Neal.

Justin was a big, tall and muscular guy with an incredibly loving heart. He was very protective of his family and friends.  He loved spending time with them and especially relished teasing his nieces and nephew. Justin was very generous, caring and sweet.  He was very hard-working, dedicated and successful in his job. He loved classic cars and started his collection with a red 1967 Chevelle.  His pride and joy was a Verdoro Green 1968 Pontiac GTO, owned by his father-in-law since 1971 and restored in 2017 by his high school friend Scott Mills.  Justin and his GTO won numerous awards including Best of Show at multiple shows. He enjoyed working out, watching football, going to car shows, swimming in his pool, collecting anvils and vises, and eating home-cooked meals.  Many who knew him may not have guessed how much he loved his cats, Bibi and Vitto. Justin was very patriotic and extremely proud of his service in the Marines. He was thrilled to reconnect with his Marine Corps brothers after 20 years.

Justin is survived by his wife, Dr. Mindy Haseleu; his mother, Marcia (Hughes) O’Neal and her husband, Dan; his father, Doug Calvert and his wife, Ilana; his brother, Matt Bowersock; niece, Madison; in-laws, Bob and Beth Haseleu and Vance and Teppy (Haseleu) McCaw; and niece, Rowan and nephew, Lane.  He is also survived by numerous aunts, uncles, cousins, and friends.

He was preceded in death by his sister, Mari-Kate Bowersock; and grandmother, Mary Hughes.

A funeral service was held at Gunderson East Funeral Home and Cremation Care, 5203 Monona Dr., Madison, at 3 p.m. on Sunday, Sept. 29, 2019.  Online condolences may be made at www.gundersonfh.com.

Following services for Justin in Madison, WI, there will be cremation, then, services with burial at the Fort Scott National Cemetery at 12:30 p.m., Friday, November 1, 2019, under the direction of the Konantz-Cheney Funeral Home, 15 W. Wall St., Fort Scott, Kansas.  Members of the United States Marines Funeral Detail will present Military Honors.

Condolences may be submitted to the online guestbook at konantz-cheney.com.