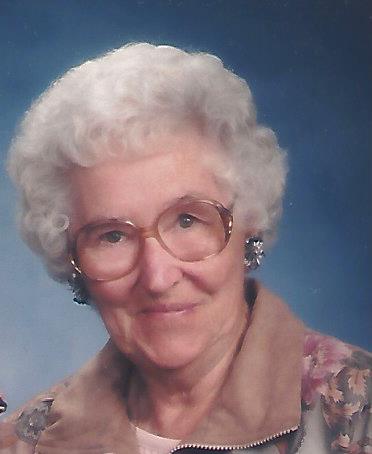 Lucile Irene Wolf, 96, of Fort Scott, died at her home, Saturday morning, August 1, 2015. She was born January 15, 1919 near Deerfield, Missouri the daughter of William Lewis and Alice Messick Endicott Schilling. She married Arthur Edward “Art” Wolf on September 18, 1946 in Fort Scott, Kansas, he preceded her in death on July 6, 2004.

She is survived by a sister, Ruby Myers of Fort Scott, a brother, William Robert “Billy Bob” Schilling of Nyssa, Oregon, as well as several nieces, nephews, and Cousins. In addition to her husband, Art, she was preceded in death by her parents, two brothers, Floyd and Lawrence Schilling, and a sister, Sara Parker.

Rev. Jared Witt will conduct Graveside services for Lucile Wolf at 10:30 a.m., Wednesday, August 5, 2015 at the Clarksburg Cemetery under the direction of the Konantz-Cheney Funeral Home. The family suggests Memorial Contributions to the Diamond Community Church, donations may be sent to, or left in the care of the Konantz-Cheney Funeral Home, 15 W. Wall St., P.O. Box 309, Fort Scott, Kansas 66701. Condolences may be emailed to [email protected]