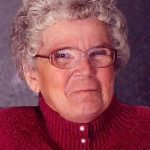 Marcine L. West, 85, formerly of Redfield, Kansas, passed away Thursday afternoon, August 15, 2019.  She was born at home on April 16, 1934, to Albert Henry and Lorenia Long Davis. She was raised on the family farm north of Bronson, near Xenia, Kansas.  She married Delbert Eugene West on December 22, 1952, in Mound City, Kansas, he preceded her in death on February 3rd, 1984.

Marcine spent time as a Social Worker and Care Giver and she loved her Farm near Redfield, Kansas.