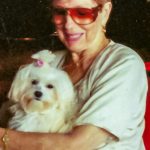 Mary Jo DiNardo, age 96, passed away June 14 at her home for the past 12 years at Presbyterian Village in Fort Scott.

Mary Jo was born January 9, 1925, to Myrle and Wilma Gunsaullus in Fort Scott, Kansas. She graduated from Fort Scott High School with the Class of 1943. She married James V. DiNardo on January 15, 1946, after meeting at the Tower Ballroom in Pittsburg when he was stationed at Camp Crowder. Together they had five children. She worked at Citizens National Bank for over 20 years.

Mary Jo, fondly known as “Mary Go” to her family, will be remembered for her “champagne taste.” She frequently threatened her children and grandchildren that they wouldn’t be going to the Ritz” if they didn’t behave. She had an affection for her many dogs over the years as they were her constant companions. Mary Jo was an exceptional cook and came from the generation that took pride in preparing two daily meals with her specialties including spaghetti and meatballs and garlic potato salad. She enjoyed driving her convertibles, happy hours with family and friends, reading, and dinner out. She also loved live music and when living in Florida was a regular on the live music scene. Mary Jo and Jim enjoyed it when the family would visit their condo in Naples where they lived after retirement for several years. Mary Jo loved going to the casino and in the 70’s and 80’s organized several group trips to Las Vegas. Her last outing was a trip to the casino a few weeks before her death.

Mary Jo also leaves behind some very special people at Presbyterian Village who became like family to her.

Mary Jo was preceded in death by her husband in 2009, a son Marc James DiNardo in 1987, her parents and a brother.

Following cremation, private family graveside services will be held at the Fort Scott National Cemetery under the direction of the Konantz-Cheney Funeral Home. The guest book will be available at the funeral home until July 6, 2021. Memorial contributions may be made to the Good Samaritan Fund at Presbyterian Village and may be left in the care of the Konantz-Cheney Funeral Home, 15 W. Wall Street, P.O. Box 309, Fort Scott, Kansas, 66701. Condolences may be submitted to the online guestbook at konantz-cheney.com.