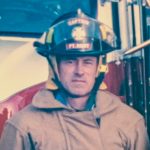 Michael Richard Conroy, 71, of Fort Scott, went to be with the Lord on Saturday morning, December 19, 2020. He was born in Ottawa, Kansas, to Clarence Richard Conroy, Jr. and Mary Ann Welton Conroy. He moved to Fort Scott when he was ten years old.

He married his high school sweetheart Connie Sue Magee on July 19, 1969, in Fort Scott, Kansas, and she survives of the home. They are the proud parents to three sons, Brian (Jamie), Brent Michael (Crystal), and Matthew (Krista). They were blessed with eight grandchildren: Austin (Saundra), Patrick, Grace, Evan, Anna, Bailey, Jake, and Hunter.

Mike was a 1967 graduate of Fort Scott High School. He graduated from Fort Scott Community College in 1970. He attended two years at Pittsburg State in automotive technology. His first job was plant manager for Henkle Bottling Company. He worked for several years for Norris Heating and Air Conditioning. He served on Fort Scott Rural Fire before joining the Fort Scott Fire Department in 1977. He worked there for fifteen years and excelled at his job as a firefighter. He then was employed at Fort Scott U-234 on the maintenance staff at the high school for eleven years.

Mike was an avid sportsman all his life. He taught his sons and many of their friends the enjoyment of fishing and hunting. He was a friend to many and enjoyed helping others. He was a member of the First Baptist Church. He attained his Eagle Scout at age fourteen, and was a member of Ducks Unlimited.

He is survived by his wife Connie and his three sons, their wives, and eight grandchildren. He was preceded in death by his parents and two infant sisters.

Rev. Ken Ansell will conduct graveside services at 2:00 p.m. Monday, December 28, 2020, at Memory Gardens under the direction of the Konantz-Cheney Funeral Home. Memorials may be made to the First Baptist Church, Care to Share, or charity of donor’s choice and may be left in the care of the Konantz-Cheney Funeral Home, 15 W. Wall Street, P.O. Box 309, Fort Scott, Kansas, 66701. Condolences may be submitted to the online guestbook at konantz-cheney.com.