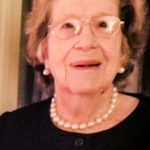 Pauline “Polly” Louise (Gordon) Alsop, affectionately known by family members as “Red”, 99, formerly of Fort Scott, passed away Friday morning, July 29, 2022, at Infinity Park Nursing Home in Overland Park, Kansas. She was born February 8, 1923, in Eve, Missouri, the daughter of John Worth and Lillian Lola (Kearns) Gordon. She married Harold Dean Alsop February 8, 1941, in Girard, Kansas, and he preceded her in death June 18, 1997.

She worked for several years at the Bourbon County Tag Office. She was a life-time member of the First United Methodist Church, White Shrine of Jerusalem, and Order of the Eastern Star.

Polly was kind and tender-hearted. She had a love for children and animals. She loved to play Bridge with lady friends in both Fort Scott and Clinton. And she was particularly fond of playing Rook with all her family members – always had a Rook game going! She loved watching the Royals and Chiefs on TV.

Polly welcomed anyone to her table – there was always an extra plate. She loved to bake and cook and give to friends and neighbors during the holidays. She was known for her pies; “Polly’s Pies” and always had homemade ice cream. Polly was always cooking for a house full of family members and their friends! She was known far and wide by dozens of high schoolers as ‘Aunt Polly’ and her house was always the gathering place of all the kids.  Polly helped with MYF, Cub Scouts, Campfire; a little league baseball coach, homeroom mother…she did it all.

Polly also loved to sew and made clothes and costumes for her children and grandkids and made beautiful formals for her daughter Sue.

Rev. Chris Eshelman will conduct graveside services at 10:00 a.m. Thursday, August 4, 2022, at the Fort Scott National Cemetery under the direction of the Konantz-Cheney Funeral Home. Condolences may be submitted to the online guestbook at konantz-cheney.com.