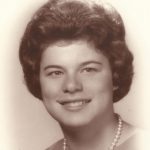 Rebecca worked for Fort Scott Community College for twenty-five years, and for Five Corners Mini Mart for the last fifteen years. She had a bachelor’s degree in English.

Survivors include her daughter, Amy L. Murray of Pittsburg, Kansas, her son Geoffery A. Murray of Fort Scott, Kansas; step-daughter Julie Workman of Girard, Kansas; her granddaughter, Stephanie Eastwood; a nephew, Jason Sack, and Kevin Taliaferro, who was like a son to her. In addition to her husband Wayne, she was preceded in death by her parents, and a sister, Kathryn Sack.

Bishop Walter Simpson will conduct funeral services 11:00 a.m. Friday, January 19, 2018, at the Konantz-Cheney Funeral Home with burial following at the Fort Scott National Cemetery. The family will receive friends Thursday evening, January 18, 2018, from 6:00 until 7:00 p.m. at the funeral home. Memorial contributions may be made to the FSCC Endowed Scholarship Fund and left in the care of the Konantz-Cheney Funeral Home, 15 W. Wall Street, PO Box 309, Fort Scott, KS 66701. Condolences may be submitted to the online guestbook at konantz-cheney.com.