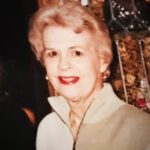 Sharon graduated from Fort Scott High School with the Class of 1951 and earned her Associates Degree from Fort Scott Community College. Sharon was a homemaker, but she also worked for the telephone company, and then in 1986 became owner and operator of Leek’s Ladies Clothing, retiring after twelve years in 1998.

Sharon was a member of the First United Methodist Church, PEO, Pierian Beta, and was Chairperson for the Class of 1951.

Survivors include two daughters, Stacey Snodgrass and husband Kent of Prairie Village, Kansas, and Laurie Short, also of Prairie Village, Kansas; a brother, Don Miller of Fort Scott, and a sister, Diane Miller, of Smithville, Missouri. In addition to her husband Skip, Sharon was also preceded in death by her parents, and a sister, Connie Miller Parks.

Rev. Steve Cole will conduct private family graveside services Tuesday, September 15, 2020, at the Fort Scott National Cemetery under the direction of the Konantz-Cheney Funeral Home. Memorial contributions may be made to Lee’s Paws & Claws Animal Shelter and may be left in the care of the Konantz-Cheney Funeral Home, 15 W. Wall St., P.O. Box 309, Fort Scott, KS 66701. Condolences may be submitted to the online guestbook at konantz-cheney.com.