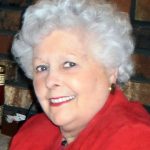 Shirley Louise Forgey, 87, of Fort Scott, passed away early Friday morning, January 18, 2019, at her home.  She was born October 20, 1931, in Springfield, Missouri the daughter of Virgil Floyd and Ruth Hallie (Buck) White.  She married Varrell L. Forgey, December 30, 1950, in Benton, Arkansas, and he survives of the home.

Mrs. Forgey is a member of the First United Methodist Church of Fort Scott.

In addition to her husband, Varrell, she is survived by a daughter, Melinda Sedelmeyer and husband, Rob of Medina, Ohio, a son, Virgil Forgey of Payson, Arizona, a brother, Robert White of Iola, Kansas, five grandchildren, and four great-grandchildren.  She was preceded in death by her parents, and a brother, Thomas White.

Rev. Steve Cole will officiate funeral services at 10:00 a.m., Wednesday, January 23, 2019, at the Konantz-Cheney Funeral Home.  The family will receive friends from 9:30 a.m. until service time, Wednesday at the funeral home. Burial will be in the Fort Scott National Cemetery.  The family suggests memorials to the First United Methodist Church, and they may be left in the care of the Konantz-Cheney Funeral Home, 15 W. Wall St., P.O. Box 309, Fort Scott, Kansas, 66701.