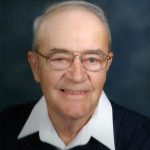 Shorty served in the Korean War with the US Marine Corps from March of 1952 until August of 1953. He was a dairy farmer and rancher, and he was a member of the Hiattville United Methodist Church. He was also a member of the Devon Masonic Lodge #92.

Shorty’s greatest joy was spending time with family, spoiling the grandchildren, and working on the ranch. He also enjoyed restoring antique steamer trunks as a hobby.

Rev. Dallas Peterson will conduct funeral services at 2:30 p.m. Tuesday, July 24, 2018, at the Konantz-Cheney Funeral Home with burial following at Memory Gardens Cemetery. The family will receive friends Monday evening, July 23, 2018, 6:00-7:00 p.m. at the funeral home. Military Honors at the cemetery will be conducted by the Olson-Frary-Burkhart Post 1165 Veterans of Foreign Wars Memorial Detail. Masonic services will also take place at the cemetery and be conducted by the Devon Masonic Lodge #92. Memorial contributions may be made to The Beacon, or the Hiattville United Methodist Church, and left in the care of the Konantz-Cheney Funeral Home, 15 W. Wall Street, PO Box 309, Fort Scott, KS 66701. Condolences may be submitted to the online guestbook at konantz-cheney.com.