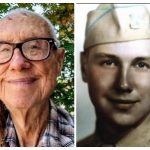 No services are planned.

Walt was born July 19, 1925, on the Sadie Beck farm near Odense, Kansas, to Walter and Marguerite (Woodruff) Fredericksen. He attended Savonburg grade school and graduated from Neodesha High School in 1943.

Walt served in the U.S. Army Infantry in the ETO from 1943-1946, fought at the Battle of Metz, the Battle of the Bulge, participated in the liberation of a concentration camp, and was awarded the Bronze Star and France’s Knight of the Legion of Honor medal.  Walt was always proud to say he was a member of the famous 95th Infantry “Victory” Division, known as the “Iron Men of Metz.”

After the war, Walt studied geology at K-State from 1946-1951 and later completed classes at KU to become a Licensed Professional Engineer in Geological Engineering. Walt worked until retirement for the Kansas Highway Commission in northeast and southeast Kansas from 1951-1986.

Walt was married for 66 years to Juanita Murken of Neodesha, Ks. The couple lived on a farm near Thayer, Kansas, before moving to Fort Scott in 2002. Walt especially enjoyed fishing, attending his grandkids’ activities, rockhounding trips, and cheering for his K-State Wildcats. Walt was a lifetime member of the American Legion and Veterans of Foreign Wars.

No services are planned. The family requests donations to Sami’s Legacy, supporting the youth activities he so loved, c/o Konantz Cheney Funeral Home, 15 West Wall Street, Fort Scott, KS 66701 Phone: (620) 223-1212. Condolences may be submitted to the online guestbook at konantz-cheney.com.